Professor Sahakian and her team at the Behavioural and Clinical Neuroscience Institute at the University of Cambridge have developed two games aimed at helping users improve their attention and concentration. The first is a memory game called Wizard. Research shows that playing the game improves memory. The second is Decoder, a game designed to improve attention. In a study published in Frontiers of Behavioural Neuroscience Professor Sahakian shows that users who play Decoder significantly improve their attention in standardised tests when compared to control groups. 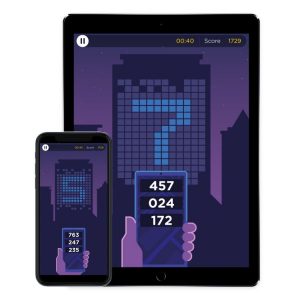 Patients with brain injury experience cognitive and psychiatric problems that greatly impair their return to work and reintegration back into family and community life. For example, many prisoners have sustained a head injury earlier in life, often resulting in abnormal impulsivity and poor inhibitory control following damage to the fronto- parietal network. Patients experiencing depression after a traumatic brain injury (TBI) show increased levels of anxiety, cognitive deficits and disability in comparison with those who do not develop depression. Emotional sequelae after brain injury, such as anxiety and depression, often interfere with successful rehabilitation and recovery.

TBI can cause both localized and diffuse damage. The majority of TBI studies have focused on the effects of focal injuries, which have been found to be of limited value when attempting to predict clinical outcome. The study of diffuse axonal injury may offer a broader neurobiological framework for understanding clinical outcomes following brain injury. For example, evidence from neuroimaging studies has demonstrated that depression is associated with dysfunction in areas involved in processing emotional stimuli, such as the insula, the thalamus and the subgenual anterior cingulate cortex (ACC), as well as abnormal function in brain regions involved in cognitive control, such as the dorsolateral prefrontal cortex (DLPFC). Importantly, recovery from depression has been associated with increased activity within the DLPFC and decreased activity within the subgenual ACC, the insula and the thalamus, among other regions. Evidence indicates that depressed patients show abnormal regulation of negative and positive valenced information as well as preferential processing of negative information (i.e. a mood-congruent processing bias).

These cognitive dysfunctions may result from alterations of two brain circuits: an amplified emotion-processing circuit and an attenuated cognitive control circuit, which will normally suppress such abnormal affective responses. In other words, TBI-induced depression may result from altered functional connectivity of a set of networks associated with emotional regulation. However, other factors, including a number of adjustment issues and challenges, may also lead to depression in this population. In the context of response inhibition, the right inferior frontal gyrus (RIFG) has been postulated to be the main area associated with cognitive control. Nevertheless, high-level cognitive functions such as response inhibition require the integration of information across spatially distinct brain regions and therefore diffuse axonal injury and its effect on long-range white matter tracts may be responsible for the compromised response inhibition found in TBI populations. The coordinated activity of large- scale brain networks such as the central executive, the salience and the default mode networks (DMN) seems to be necessary for efficient inhibitory control. Studies of these networks in TBI populations have reported abnormally increased DMN connectivity, as well as reduced connectivity, between salience and DMN during the execution of response inhibition tasks.

At first sight, it might be assumed that cognitive problems resulting form both focal and diffuse brain injury are irreversible once natural recovery has plateaued. However, there is growing evidence that modern technology and cognitive-enhancing drugs offer hope for improving outcome through:

Cambridge Cognition (www.cambridgecognition.com) has launched CANTABmobile, a tool for helping primary care physicians detect clinically relevant memory impairment. A product for secondary care is now in development that will enable in-depth cognitive testing to be carried out quickly, efficiently and accurately using an iPad platform. The product is completely automated to save clinician time and is being assessed in the head injury and hydrocephalus clinics at Addenbrooke’s Hospital.

Professor Barbara Sahakian has developed a technique for using the standard battery of CANTAB tests of cognition in a manner that translates the score achieved into a predictor of a patient’s ability to function at home (e.g. feeding themselves, finding objects). The patent has been licensed to Cambridge Cognition, who has added this IP to the portfolio of technology that has been licensed from the University. The current IP Status is: Patent Pending Commercial Status: Licensed.

There is good evidence that cognitive training can improve cognitive performance in patients with neuropsychiatric and neurodegenerative disorders (Sahakian et al., 2015; Savulich et al, 2016). Cognitive training has broader effects that impact on activities of daily living and psychosocial functioning. Cognitive training using a game can increase motivational deficits underlying neuropsychiatric symptoms and can synergise with physical exercise in healthy older adults. Furthermore, there is some evidence for changes in the brain, including functional activation and increased dopamine D1 receptor density. Working memory is an important component of all executive function tasks, such as planning, problem solving and decision-making and is therefore an ideal target for cognitive training. Working memory also has a strong relationship with both fluid and crystallized intelligence. Importantly, the ACTIVE study group reported that online cognitive training reduces the number of cases of cognitive decline and dementia. These results support the effectiveness of cognitive interventions for maintaining cognitive health over the long-term and indicate modest but detectable far-transfer to activities of daily living, the health-related quality of life and driving outcomes.

Impulsive behaviours and poor inhibitory control are frequently reported in patients with TBI. Such behavioural patterns not only have numerous repercussions on quality of life, but also have a negative impact on the rehabilitation process. Abnormal impulsivity may lead to an increased incidence of criminal behaviour years later.
One key issue is whether early detection of impulsive behavior might be treatable and thereby avoid any long-term negative consequences. Despite the evidence for the beneficial use of methylphenidate in response inhibition paradigms in psychiatric and healthy populations, there have been no studies that have investigated the effects of methylphenidate on the neurobiological basis of response inhibition in TBI patients.
Our study has demonstrated the feasibility of investigating the neural basis of response inhibition in TBI patients and an age-matched controls using functional magnetic resonance imaging and a stop-signal paradigm. In a randomised, double-blinded, crossover study, patients received either a single 30 mg dose of methylphenidate or placebo and performed the stop-signal task. Healthy controls underwent the same protocol without methylphenidate. Activation in the right inferior frontal gyrus (RIFG), an area associated with response inhibition, was significantly lower in patients compared to healthy controls. Poor response inhibition in this group was associated with greater connectivity between the RIFG and a set of regions considered to be part of the default mode network (DMN), a finding that suggests the interplay between DMN and frontal executive networks may be compromised. A single dose of methylphenidate rendered activity and connectivity profiles of the patients RIFG near normal. The results of this study indicate that the neural circuitry involved in response inhibition in TBI patients may be partially restored with methylphenidate possibly due to increased dopamine and noradrenalinelevels.

These studies provide a powerful platform for the further evaluation of cognitive enhancing drugs as they emerge.

An initiative is currently being explored in a pilot study funded by the CLAHRC for the East of England which evolved out of discussions within the current Brain Injury HTC about physiological markers of emotional dysregulation associated with episodic aggressive behaviours in adults with developmental or acquired brain damage by modification of autonomic nervous system modulation of heart rate variability. Our first study led by Dr Isabel Clare is exploring the use of transcutaneous vagal nerve stimulation.

We have partnered with Peak (www.peak.net) on the development of commercially available apps to provide training programmes that challenge very specific skills, like memory and attention. We plan to coordinate our activities in working on joint events with wider industry and SMEs and other MICs as appropriate.